It is a warm summer evening, you have just come home after playing with your friends. The moment you enter, you see a fresh new Tinkle waiting to be read. You flip through the pages, and finish it within minutes. But that’s not enough, you keep re-reading it till you memorise every single word. When someone says children books, the first thing that pops in a 80’s kid mind is Tinkle! That’s the impact of Tinkle on all our childhoods.

There’s a reason why Tinkle is one of the most revered childhood story books in the country. They were among the most confiscated books in school, the books siblings who grew up in the 1980s and the 1990s would fight over. Free periods were idled away by telling each other jokes from the books, and guffawing incessantly after. Long train journeys to one’s grandparents’ place in the sweltering summer were thoroughly enjoyable thanks to the company they provided. We would run through them so quickly, driven by the anticipation of buying the subsequent volume at the next big station. Their dimensions were so perfect that slipping a book into a science textbook was ever so easy; our unsuspecting mothers would never know. 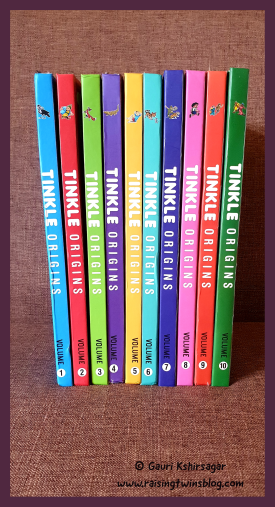 It’s been a long time since the first issue of Tinkle was released in November 1980. ‘Shikari’ Shambhu is now a conservationist, Suppandi has a girlfriend, and Tantri is finally King. Kalia the crow hits the Big Four-Oh next year. He’s become more complex over the years, expanding his social circles as he moved from the little forest he was born in, to colourful Big Baan. He is not the only character from the well-loved Tinkle universe who is suddenly all grown up. Tantri the Mantri, the prime minister who was as incompetent as he was ambitious, has finally become king, after just four decades of devious plotting.

The feel of the comic we had in the 80s’, the simplicity of it, has somewhat been lost over the decades. I was never a fan of the ‘Tinkle Digest’ of the 90s’, though they provided with more stories at the expense of size. Over the years my Tinkle collection has been misplaced, borrowed or just lost. My younger brother still has his collection though, his subscription running throughout his childhood and teenage years. Last time when we visited my hometown, the twins were all over the comics, we even got some of them with us.

Hence when I saw this collection of ‘Tinkle Origins’ I knew, I had to buy them for the kids. Tinkle Origins Pack of 10 contains issues from the early years of Tinkle. It has issues from the December 1980 to March 1984 (Tinkle No 1# to 54#). The format is the same art style with which you were familiar with as a child 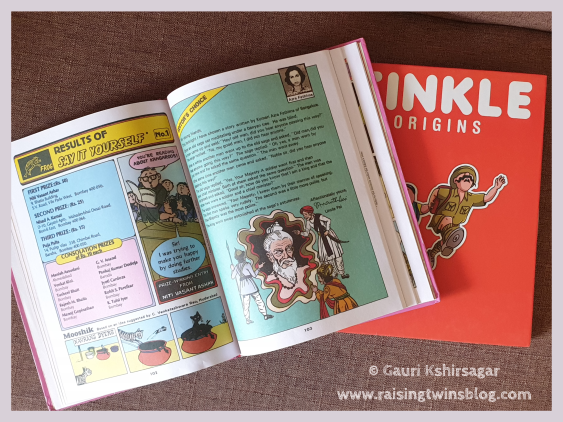 PROS: This is a very well-produced hard-bound set. It has not just the classic memorable stories; it even includes Tinkle covers from the early days and stories behind the original creators of Tinkle. It also works great to get the little ones into reading. It includes the first appearance of iconic Tinkle toons such as Suppandi, Shambu, Chamataka, Kalia the Crow, Doob-doob and many more. Also includes Pyarelaal, Anwa and Nasruddin Hodja . Each issue has fun-filled games, puzzles, riddles and most importantly, personalised letters from everyone’s beloved Uncle Pai. This collection deserves a special place in the children’s books section in every family’s library.

CONS: I was a bit late in purchasing though, the full set was all sold out on the ACK site which would have saved me a lot of money. I had to buy the books from AMAZON India, each separately (though Vol 1-6 is still available as a set). With delivery charges the whole cost came around a whopping ₹3000/- compared to the original price of ₹ 2443/-. Since it’s a collector’s edition I don’t regret buying it. If I have to nit pick, it would be that the book should have been made like the old bound books we used to make when we were children. That would have been a total nostalgic feeling like I just discovered my old comic book. With a reprint like this, that 1% is missing.

The complete set is a must have for any collector. The enticing stories and educative comics make it one of the most important childhood story books in India today. It’s the perfect introduction for children to the amazing and magical world of Tinkle.

The books are Available on AMAZON India:

*Thanks a lot for visiting my blog. Please do ‘★ LIKE’ the post if you found it to be useful.Your comments, suggestions, criticism and all opinions are very much appreciated. Please do write your queries in the Reply/comments section and I will try to get back to you asap.

What are you looking for?